Symi Town: Yachts on the north quay of the inner harbour

Once a major shipbuilding and sponge fishing centre, Symi is now primarily a tourist destination. The island has had a chequered history but after much restoration (heavily controlled by the authorities) its multi coloured buildings now make a spectacular sight.

The harbour of Symi town (also called Yialos) includes a small nautical museum and is connected to the main town (Chorio) by steps; about 350 of them! It’s worth the walk up for the views at the top, not to mention the superb 19th century buildings you will pass on the way up. 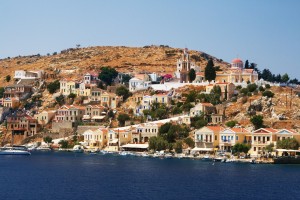 Symi Town: The north side of the harbour with local boats on the quay

The locals are evidently a religious lot; there are over a dozen churches and a number of smaller chapels. The castle was sadly destroyed in the second world war but as you wander the narrow streets you can visit The Museum, a restored Pharmacy and an 18th century mansion.

If you fancy going further afield, there are plenty of other sites to see around the island, including the impressive Panormitis.  you can take a taxi or hire a car from the harbour.

If that’s all too much, take a seat in one of the many cafe’s and restaurants and watch the world go by. It gets even better once the day trippers from Rhodes depart and an air of calm descends.

There are all the facilities you’d expect from a small town, including provisions, souvenirs and banks with ATM’s. If only all small town were as impressive.

Get in touch
AREA MAP